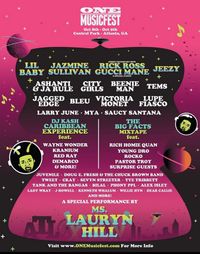 Featuring multiple stages of non-stop music, the best Food Trucks from around the globe, arts and craft Merch Village, an interactive Visual Artist Village and sponsor activations, "ONE Musicfest is the not to be missed festival of the year." - Billboard.